To capture some scenes that have extreme exposures requires the use of special techniques.

The dynamic range of the human eye is far greater than most cameras which is why shooting sunsets often means capturing the sky, or capturing the foreground, but not both, unless special techniques are employed.

I’m going to give a couple of examples of techniques for dealing with extreme exposures.

I shot this image at f/16 to get the ‘starburst’ from the sun.

Manually exposed, I took a number of test shots and examined the camera histogram to work out the exposure needed. It should be noted that the preview image displayed on the back of camera is often the JPEG, even if you are shooting in RAW, so there will always be a bit more detail captured than the over/under exposure ‘blinkies’ may indiciate, if you have that featured enabled.

I made sure that I carefully aligned the sun slightly behind the building to take the edge off the strength and sneak just enough sun through to burst around the edge of City Hall.

At the time of shooting this image I had in mind exactly how I wanted it to (hopefully!) look when edited. 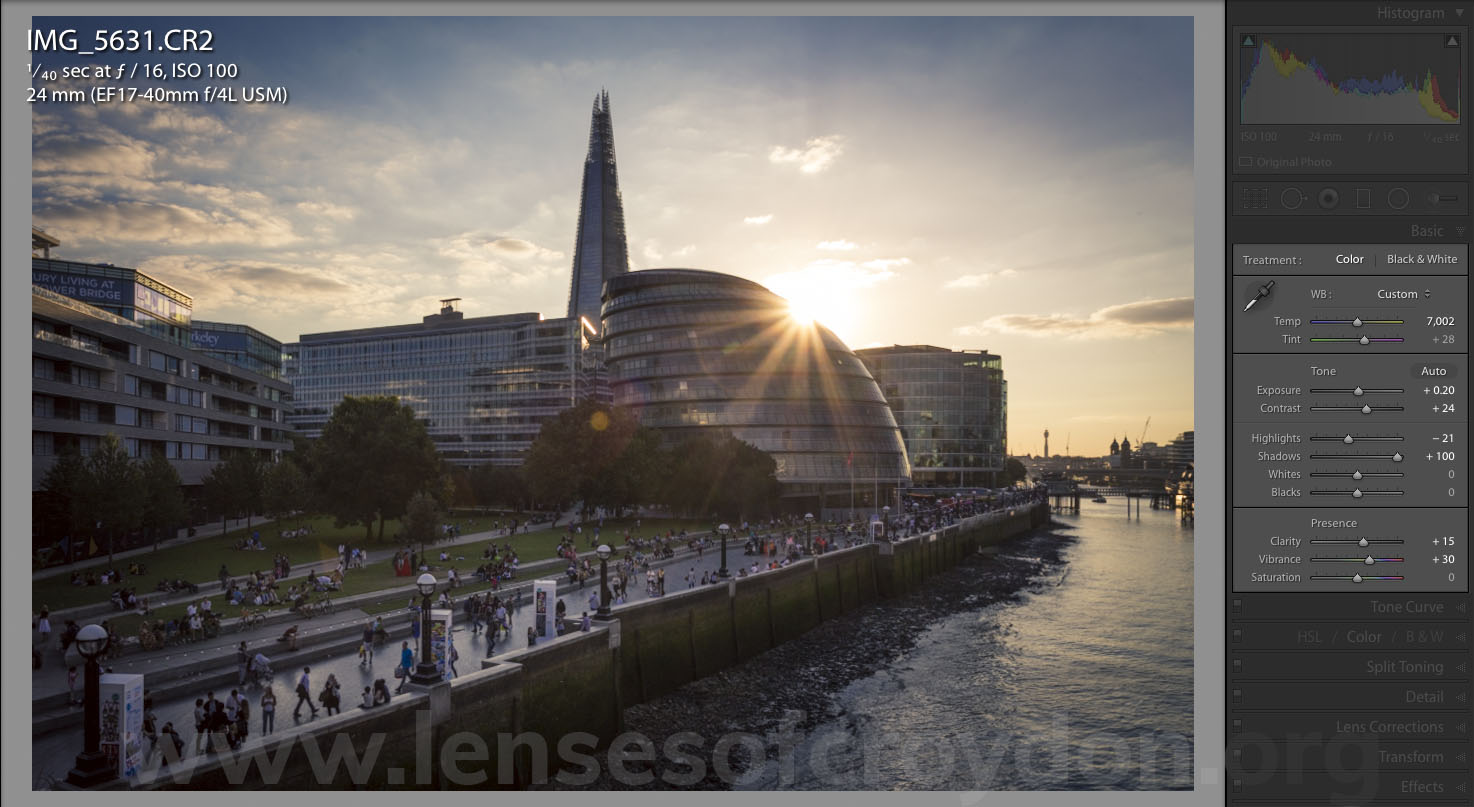 This was shot on a Canon 6D at ISO 100, nonetheless pulling this much shadow detail back does create some noise even at ISO 100, as it’s quite a harsh amount of shadow underexposure.

To a degree you can minimise this with noise reduction in software although you will always still lose a bit of quality, it’s just a trade off you have to make.

In Lightroom you can hit the ‘J’ key (or via menu View -> Show Clipping) to show the highlight and shadow clipping, as detailed in the red overlay and the two arrows at either end of the histogram. 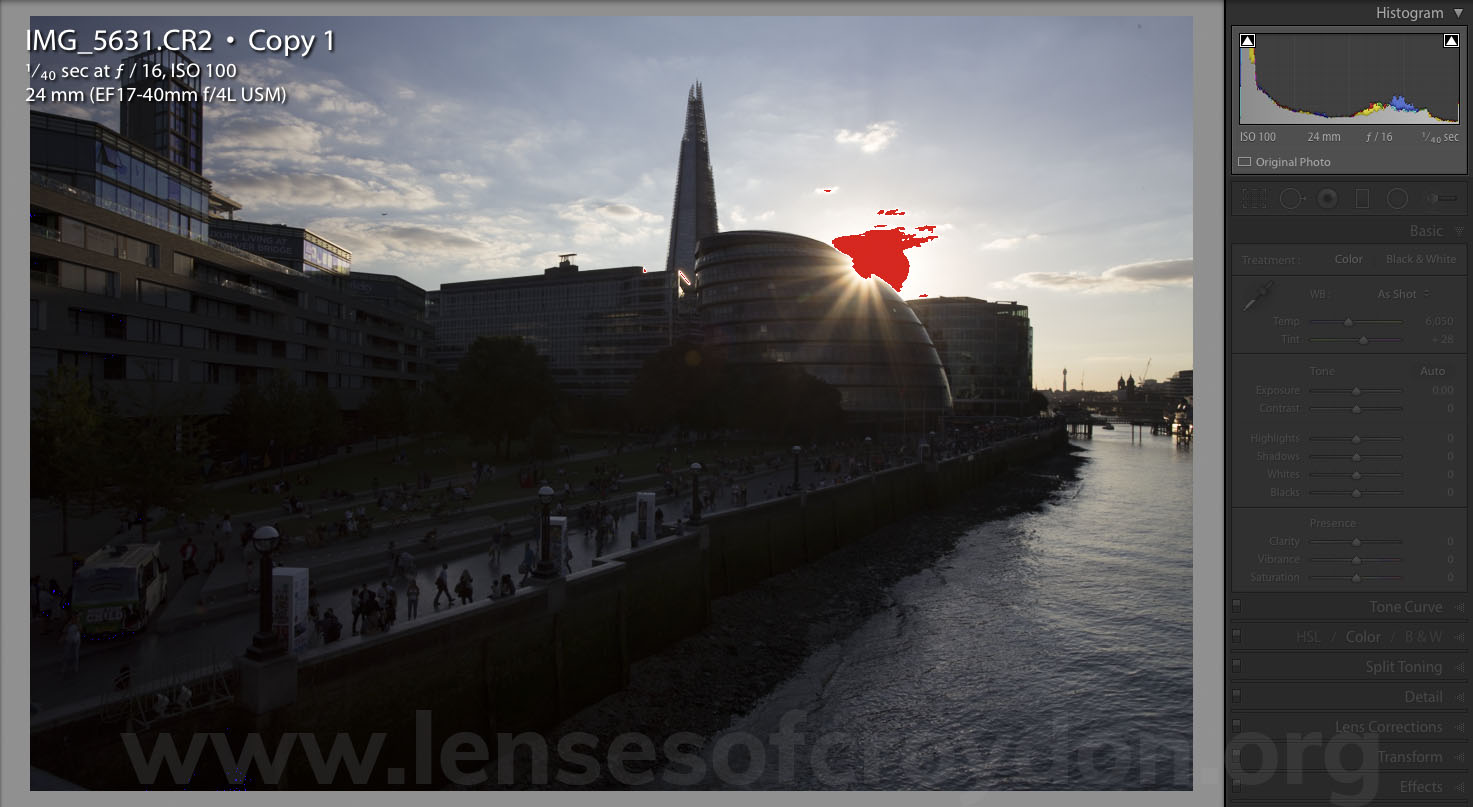 Another technique for extreme exposures is HDR (high dynamic range) or bracketing. This is simply multiple exposures (typically three, but can be more) of the same scene, which are then blended together in post.

There are varying techniques for blending, in the early days of HDR the main method was to use Photomatix which would combine the exposures and use some colour mapping functions to generate the base image.  The results varied from realistic to futuristic and for a long time this made HDR something that people either loved or loathed, as often the results would look quite garish.

Nowadays HDR functionality is built in to Lightroom and Photoshop with the end result being that you can create a 32-bit DNG file with a massive amount of dynamic range. This often generates a more realistic looking output file and nowadays makes HDR a more palatable way of capturing exteme exposures.

Other methods can be used such as manual blending of multiple images using layer masks in Photoshop.

There are however, a couple of downsides to HDR.

Firstly each frame has to line up, so you either need to shoot on a tripod, or if handheld at least be very careful to shoot as aligned images as possible. Secondly, if there is movement of objects in the frame then you will have issues to deal with (ghosting).

Both of these can be corrected for in software, to a point, so HDR is not always the best solution. But the upside is this will create the cleanest image in terms of exposure. 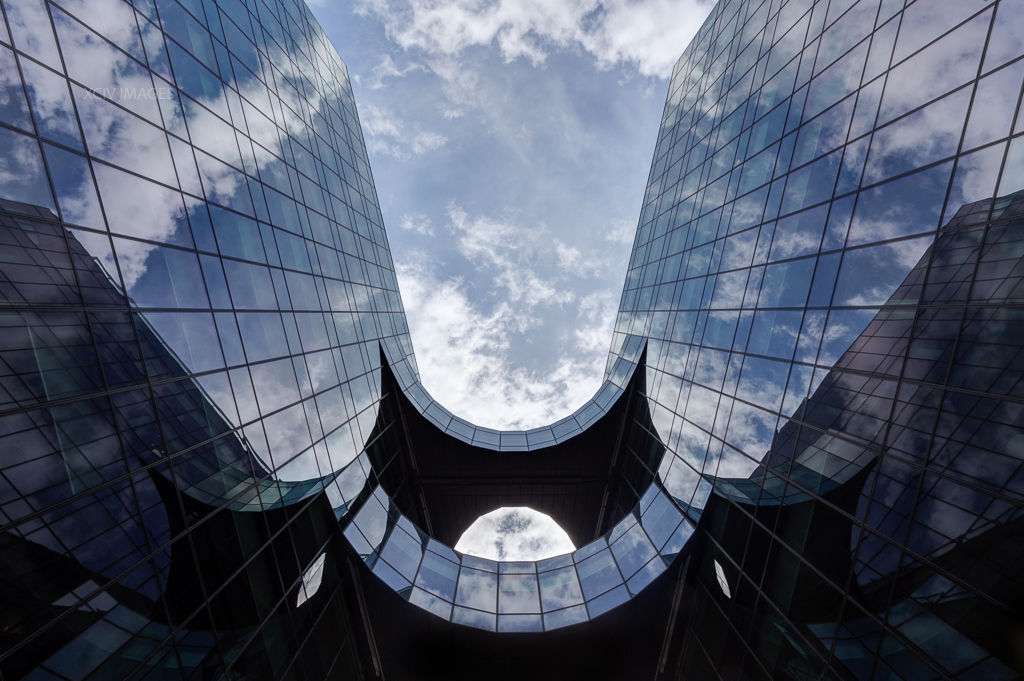 One final technique not covered here, is most often used with landscape photography, the use of gradiated neutral density filters to take the exposure down in certain areas of the image.  This most often lends itself to reducing the exposure of the sky so that you can capture both foreground and background in one RAW file.

Hopefully this sould provide some tips as to how to cope with extreme exposures and these features now being built-in to Lightroom and Photoshop make it very easy to do.

All text and images in this blog post are Copyrighted and may not be reproduced in whole or part without permission.

Photographing for around 9 years — I shoot city, street, landscapes, architecture and portraits.